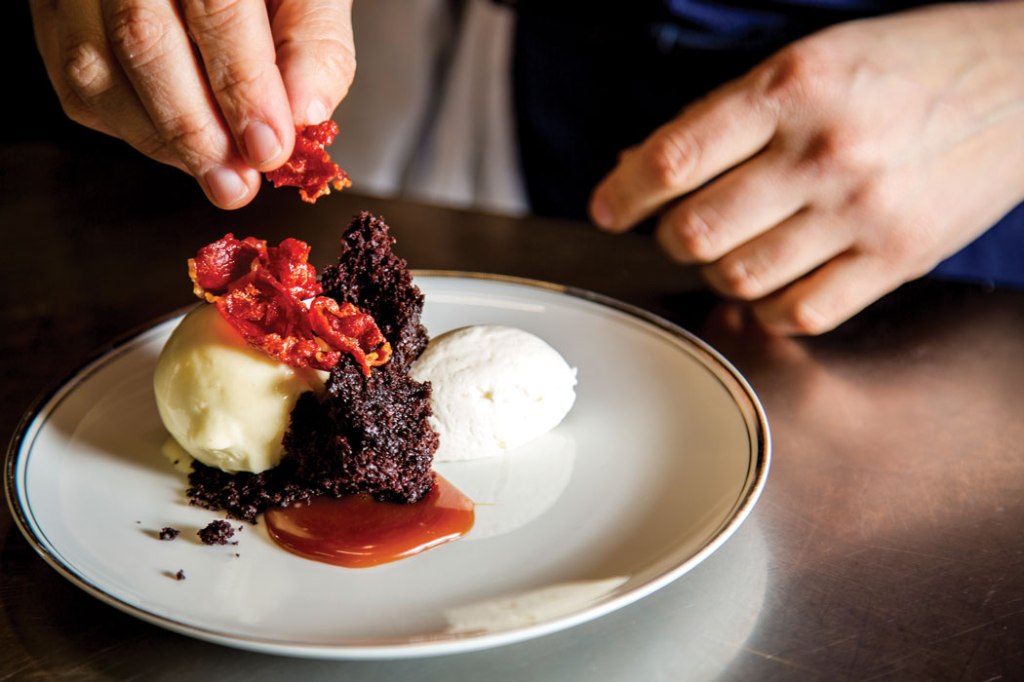 Originally published in the March 2018 issue of Down East Magazine

Dress
Typically hip Portland. But as long as you don’t wear shorts and you take off your hat at the table, no one will look sideways at you.

The Spanish sundae, one of pastry chef Ilma Lopez’s ultra-creative desserts, begins — improbable as it may sound — with a leg of ham. Or more precisely, with a variety of Basque pig fed an acorn-only diet for a singularly delicate texture and a deeply earthy character. Once the cured meat is shaved off and served, Lopez roasts the leftover bone and steeps it in milk. Then, she turns ham milk into ham ice cream and dishes it up with chocolate cake, crispy fried ham, vanilla-and-black-pepper whipped cream, and pork-fat caramel. The result is salty, smoky, sweet, and crunchy — and as the coda to a meal at Chaval, it nicely encapsulates how co-owners Lopez and chef Damian Sansonetti run a kitchen, minimizing waste and maximizing flavor.

The duo established themselves on the Portland food scene with their now four-year-old Italian gem, Piccolo. Two years ago, looking to expand their portfolio, they saw a for-sale listing for Caiola’s, a longtime West End hangout for old-school Italian. After they bought it, they retained the Caiola’s staff and — out of a sense of obligation to regulars — initially refrained from major menu changes, but they always had big plans for the place. A year later, Caiola’s officially closed, then reopened a few months later as Chaval — following a renovation that involved lots of poured concrete and distressed wood to create a countryside vibe.

Now, the menu is solidly Spanish, with offerings like patatas bravas, pork belly a la plancha, and deos (nests of skinny noodles toasted in chorizo fat, simmered in pork-and-squid stock, and served with piquant peppers and sea urchin custard). But Sansonetti is also gradually working in French dishes, like a rustic coq au vin served family-style and a steak frites with béarnaise. A few dishes even meet right in the middle of Spanish and French influences: house-made blood sausage, for instance, uses Spanish ingredients but a classically French boudin noir technique. 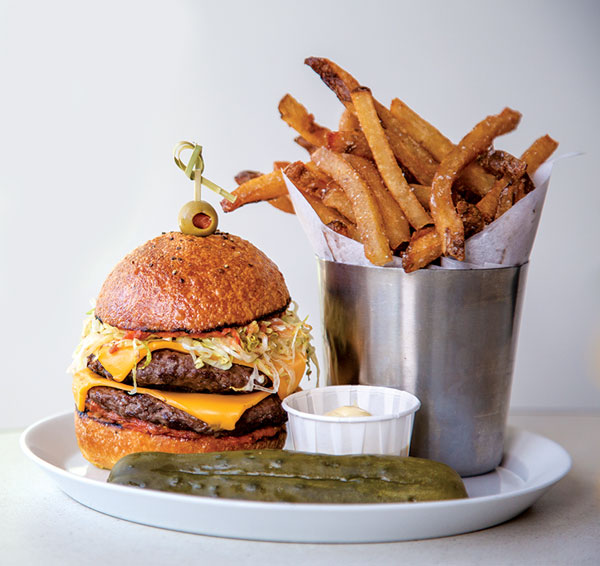 There’s also the occasional plate that follows in neither tradition and is just plain old delicious, which is why in Chaval’s first several months I ordered the burger four times. The beef comes from Caldwell Family Farm, in Turner, and the smoky, grilled patty is generously topped with tangy pickles and tomato mustard reminiscent of sweet Italian mostarda, then sandwiched inside a black-pepper brioche bun that’s brushed with smoked beef fat. 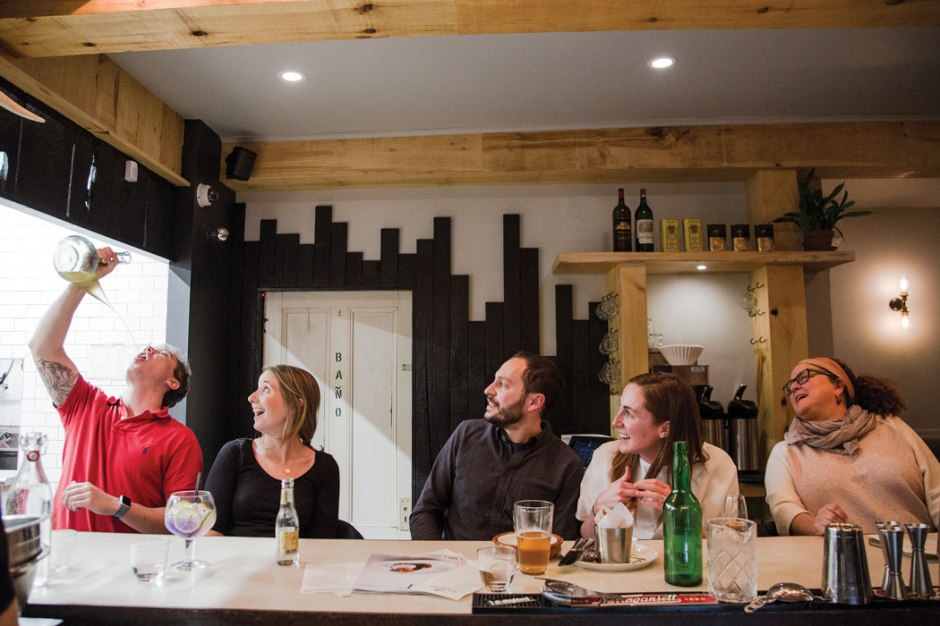 To pair with the wide-ranging food menu, cocktail wiz Patrick McDonald, formerly of Central Provisions, puts significant emphasis on mixing drinks that jibe with Sansonetti’s dishes. The Resuscitator, made with calvados, Madeira, cognac, and stone pine liqueur, is just right alongside seared scallops, and the Spritz Catalan, a blend of Provencal red wine, Campari, ginger, and club soda, nicely complements the duck egg with mushrooms and chorizo.

Similarly, Lopez, who scored a nod as a James Beard Award semifinalist last year for her pastry work at Piccolo, always thinks about how her desserts — even the incomparable Spanish sundae — square with the rest of a meal. Indeed, the sundae reflects flavors that show up across the menu. It’s a standout, but the whole dessert list (churros! chocolate mousse!) is a revelation. That’s the most remarkable thing about Chaval: any number of menu items could, at a lesser establishment, steal the show. Despite their individual brilliance, Lopez, Sansonetti, and McDonald have figured out how to create perfect harmony among every bite and sip, one exceptional taste after the next. 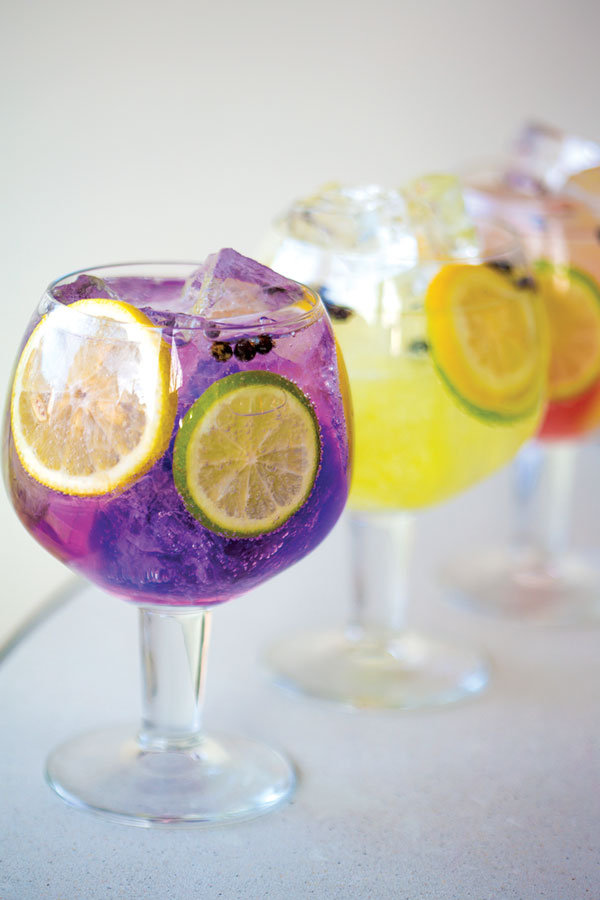