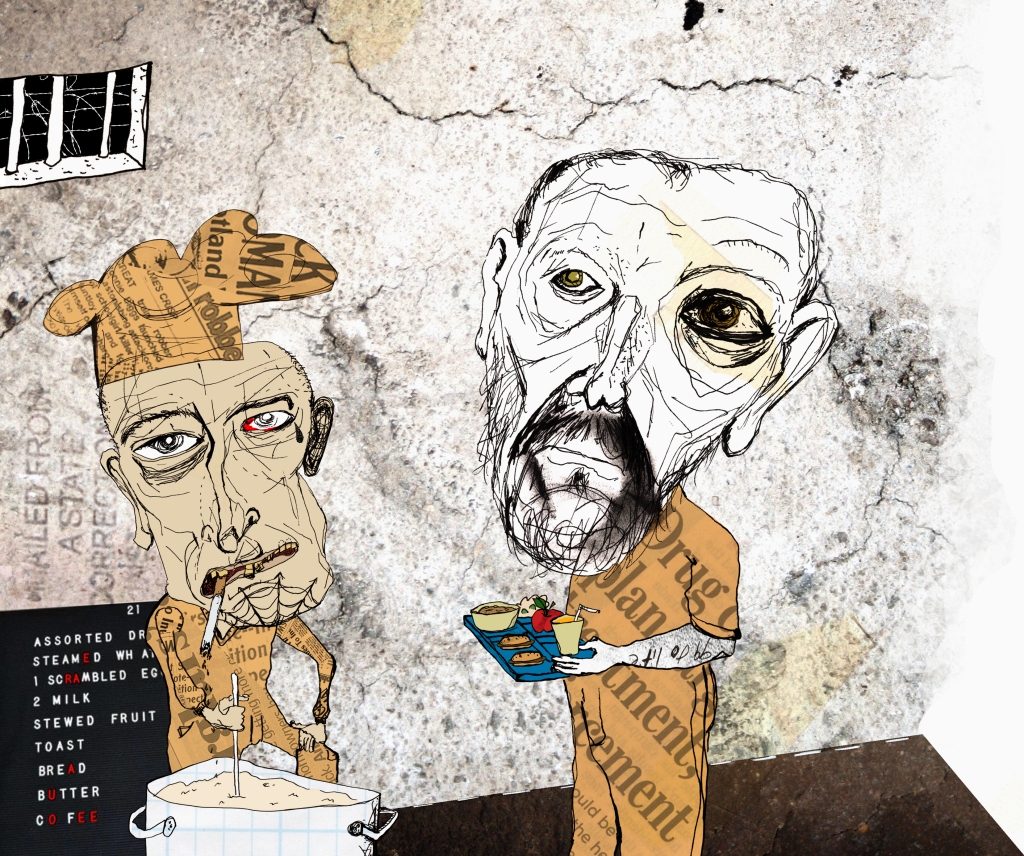 Originally published in the May 2016 Issue of Dispatch Magazine

“No, 30 days isn’t 30 years, but when you leave, you’ll definitely feel like you did time.”
These were the words told to me by a fellow inmate on my first day spent incarcerated at Cumberland County Jail.

After two OUI offenses, one in 2002 and another in early 2004, I had found myself in a goodly amount of trouble. Facing a year of probation, my lawyer got my sentence reduced to 30 days and I was allowed to serve it in January 2005, once the holiday season had died down at the restaurant I worked in at the time. (Of course, after telling me I’d have my position back upon release, they fired me by mail once I was safely behind bars.)

In jail, the point is to pass time as quickly as possible. Therefore, food plays an important role. The food was edible enough, and even when it wasn’t, there was commissary (the jail store) available to stockpile Oreo cookies and bags of Doritos in one’s cell. After years working in restaurants, I began to ponder what working in a kitchen in jail was like.

Ten years later, I decided to go back and find out. Weirdly enough, the kitchen in the Cumberland County Jail is unlike any other prison in the state.

I show up at the Cumberland County Jail at 4 a.m. on what is most certainly the darkest, coldest January morning of the year — registering at -8 degrees. I’m here to meet Richard St. Onge, manager of food services, as his shift begins.

Unlike the vast majority of correctional facilities in the US, the kitchen here hasn’t farmed out inmate meals to a large company like Aramark. It still maintains its own independent program, and I wanted to find out more about what that mammoth task must be like.

As food services manager, St. Onge organizes the service of roughly 550,000 meals per year to inmates who are either serving limited sentences or awaiting trial.

Of course, working in a jail kitchen means his concerns aren’t limited to food — he also keeps a training regimen as a corrections officer so that he may quell any potential threats that might arise in this capricious environment.

St. Onge tells me that county jail is different from prison in that the sentences tend to be much shorter, while it also acts as a “waiting room” for those facing more serious sentences. That means that people here are coming in directly off the streets, whereas by the time they reach prisons like Windham or Warren, they have been somewhat institutionalized before arrival.

St. Onge’s kitchen is run by “trustees.” This is the name for inmates who have been accepted into the kitchen program with the continued expectation of good behavior in exchange for work that earns them either time off their sentence or, if they are yet to be sentenced, cash for their commissary (jail store) account. They work eight-hour shifts, seven days a week. For these reasons, it is a highly coveted position that is regarded as a privilege, which can be taken away at the CO’s will.

It’s hard work. Before a meal, 14 kitchen trustees file in, under supervision, and set about to various prep stations. Currently, the jail houses 490 inmates, and meals are served in 12 segments on a daily basis to the various pods throughout the facility, one half of its population eating before the other.

Pods, essentially a circular building lined with individual cells around a central common area, are broken down into the classifications of A for maximum security (where inmates are on lockdown most of the time), B for minimum security (plus a separate pod that houses female inmates), and C for medium security, including sex offenders (who are required to be given additional security as they are the #1 target of other inmates).

Breakfast begins and service whirs into motion, brigade style, with the CO calling out the destination of each wave of meals that go out in heavy plastic compartmentalized trays. While B pod gets plastic tray covers, the ones sent to C pod are made of rubber to reduce the threat of being made into a shank, and all of the foods sent to inmates on suicide watch must be able to be consumed without a utensil.

The target cost to feed the inmates is around $1.28 per meal, and the menu is designed to get increasingly heavier throughout the day to induce sluggishness in the evening hours. It’s heavy on ground turkey, chicken, and potatoes, though cod or tuna is served at least once a week. All of the bread is baked fresh — it not only tastes better, but is more cost effective (plus leftovers can be turned to bread crumbs for other dishes). Both halal and kosher meals are available, and they do their best to accommodate allergies within reason.

“We have been insanely understaffed for about two years,” St. Onge tells me. “Even though I design all of the menus myself, I don’t give as much room for cooking improvisation as I used to, due to a shortage of supervision. Plus, there was that one guy who wouldn’t stop adding cayenne pepper to everything.”

We pass by two vats, one holding the fortified punch served to all inmates instead of the previous era’s offering of orange/apple juice. The other holds a substance I remember all too well: the dreaded oatmeal. This sludge was served 3–4 times a week at breakfast, and even when I knew it was coming and I always opted to go hungry, I was still forced to get out of bed and get in line to accept my tray, to pass on to one of the other inmates. Otherwise, I would certainly hear about it (unused trays get sent back to the kitchen).

Though the food program would seem to be under control, there is always the allure of giving in to Aramark, a huge company of 270,000 employees, who boasts low costs and a “97 percent retention rate of correctional accounts in 35 years,” while offering “expert care to ensure food is delivered in an appealing way that keeps offenders satisfied.”

Of course, my very first incident in “the pod” (which I’ll explain later) ends up revolving around food. I am finally transferred from intake right in the middle of lunchtime, so I get in line for chow with the other inmates. I remember it was overcast, and through the light pouring in from the second floor all I could make out were silhouettes of people, who called out their customary greeting to new arrivals of “THAT’S THE GUY!” Apparently, I was not quite “in the system” yet, so by accepting a lunch tray I deprived one of the other inmates of his, which is met with a very loud and aggressive reminder: “NEW GUYS DON’T EAT FOR 48 HOURS!” I set my tray down and skulked towards my cell, where I stood for another awkward moment that felt like a year until someone had the heart to explain that I needed to yell out the cell number to the to the Corrections Officer to get the door unlocked. This is where I would remain for the remainder of the day, reading my inmate handbook for lack of anything else to do, before attempting to interact with the general population again.

But St. Onge warns against siding with companies like this, citing his ability to quickly assess problems, everything from missing inventory to inmates cheeking their meds (pushing aside in their mouth and retaining to barter with others) without requiring corporate clearance. Keeping the food program in-house allows for more opportunities for trustees and less security issues with outside employees.

As lunch begins, I wander around and chat with a few of the trustees, including one man who handles most of the baking. As he sets about making desserts, he sums up working in the kitchen. “I work all day, come back tired, and sleep.” This is beneficial because, again, the goal is to pass the time quickly and get out of here. On the other hand, this is another one of the built-in challenges for St. Onge, who has to re-train around 50 percent of the kitchen staff each month due to turnover.

I leave the kitchen for the administrative area, where I am introduced to Lt. Arlene Jacques, in charge of the placement and development of trustees, which involves doing her best to help them learn skills to aid in finding employment when they get out.
“It sounds crazy, but for some people jail is the best thing that ever happened to them,” Jacques tells me. “Many of these inmates have never actually held down a job on the outside.” While inside, the inmates can attain certifications like Serv-Safe, giving them an edge when looking for kitchen work in the outside world.

She addresses the conflict between enrolling trustees in programs — such as maintaining the large, on-premise garden that yields up to 2,000 lbs. of fresh produce each year — while upholding a high level of security. It seems like a truly monumental task.

After spending so much time working with people in “the system,” Jacques says that one of the most important elements of her approach is empathy, not sympathy.

“Food is everything. For some of these guys, their meal is the only thing they can look forward to,” she says.

After visiting more of the facility, including a trip back into B pod — which invokes memories of walking around in circles, learning how to cheat at Monopoly, and watching Everybody Loves Raymond between episodes of Cops — I head back to the kitchen, where a conflict is brewing with one of the trustees and another inmate — leading to the decision by St. Onge to revoke his kitchen privileges as well as his “good time,” days subtracted from his sentence for good behavior. None of the other trustees seem fazed, and lunch service concludes as planned.

Back at the kitchen, officers discuss a problem with the coffee cake. The baker has apparently tried to incorporate pineapple without adding enough flour and baking powder, resulting in too much liquid from the fruit.

“Have him throw it out and start over again,” St. Onge instructs, as he simultaneously deals with trying to get maintenance to come in and service a leak in the dish area. It is incidents like this that serve as a reminder that, even though it is housed within a correctional facility, this is still a working kitchen as much as any restaurant, just riddled with challenges you would never find on the outside.

Before my visit comes to an end, St. Onge leads me over to one of the rolling racks by the oven. “This bread is still warm, and is one of the best things here,” he says as he hands me a chunk. We both take a quiet moment to eat and enjoy.

It’s good, but I assure you that personal freedom tastes a hell of a lot better.