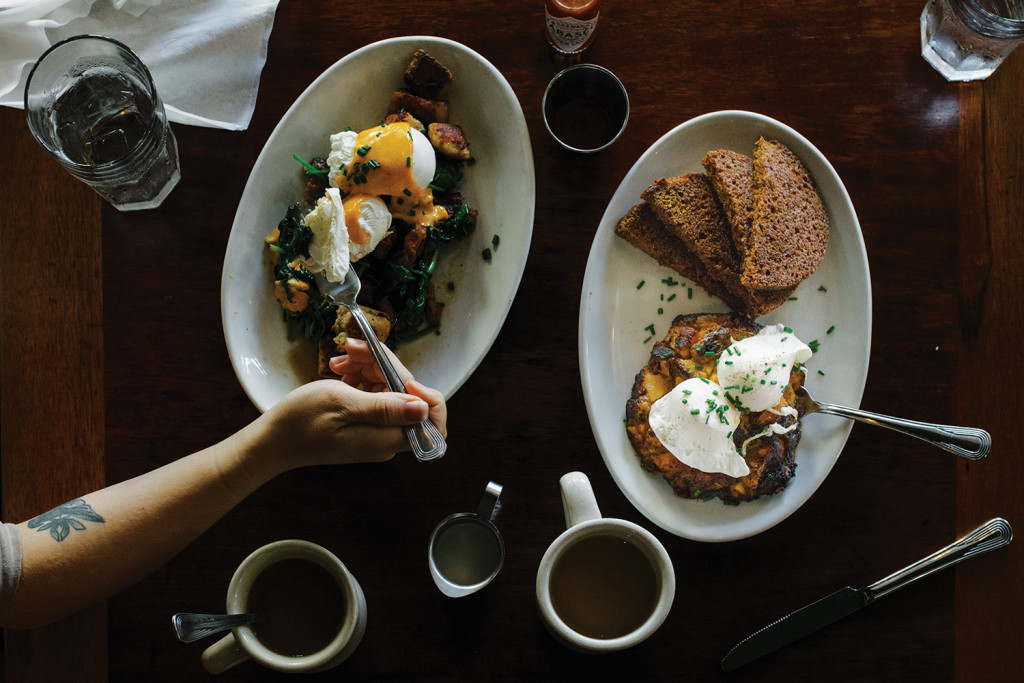 Originally published in the Dec/Jan 2015 issue of Dispatch Magazine

Sometimes even the worst dining experiences deserve a second chance

I will be the first to confess that I can be bizarrely judgmental when it comes to dining experiences.

For instance, a new place will open and I will instantly pass judgment based on something as trivial as the fact that someone I don’t like seems excited about it. I will let this loathing worsen for months, sometimes years, before I finally allow myself to be “dragged in” for dinner. This, of course, is a win-win situation, because either I was right all along or I have a fantastic meal.

That’s another thing. Much of the time I can be very, very mistaken.

There are other times, though, when I try to keep an open mind, but a meal is just so dreadful that it simply cannot be forgiven. These are the kinds of restaurant experiences that leave you feeling better about money lost on the Back to the Future slot machines at Oxford Casino than the cash you’ve just blown on a lame meal. You are forced to simply utter the words “never again” and move on.

This month, I decided to get over myself and revisit two of the most pronounced examples in my history. I was genuinely curious if it would be possible for a restaurant to be as terrible as it had been before. Years had passed, after all. It is also worth noting that I had been to each of these restaurants many times before the major infractions, so I knew they had the potential to make things right.

Brunch at the Front Room

First off, it’s important to state that I am not a Harding Lee Smith basher. I know the man is very controversial — and I do not question anyone’s experiences with him — but I have had nothing but pleasant interactions and consider him a friend. That being said, this is about one of the single worst brunches I have ever had.

At the end of 2013, I was living on Vesper Street after moving back from Boston. My apartment was literally a three-minute walk from the Front Room. When the restaurant had opened about 10 years ago, I absolutely loved it and went often, craving their spaghetti carbonara in particular. Over the years, I watched the quality decline, until very ho-hum experiences in 2009 made me pretty much wash my hands of it. While living on Vesper, I revisited their breakfast, desperately wanting it to be good because of the proximity to my apartment. It was totally passable, not great, but adequate on that visit, which gave me hope.

While a friend visited weeks later, we decided to go back on a Saturday morning. It wasn’t particularly busy, and after being seated and getting drinks (my companion claimed that her bloody mary was “fine,” but her face betrayed her true thoughts), we started into our breakfast order. Personally, after having had a few drinks the night before, I enjoy soup as a breakfast/brunch starter if it’s an option on the menu. I asked the server’s recommendation between the tomato soup and fish chowder. He responded that the chowder is very good as the kitchen utilizes scraps from “whatever fish is the freshest.”

This information seemed entirely unnecessary (before it actually arrived), but I took his recommendation, ordering the hash with eggs sunny-side-up as well.

As my chowder is placed in front of me, the first thing I notice is a peculiar smell. Further investigation reveals that the “fresh fish” is actually chunks of salmon that had been added “a la minute” to the broth before serving. My kneejerk instinct is to pick up the bowl and toss it back over the kitchen line, as there are few things more wrong than the use of salmon in New England fish chowder. Instead, I taste it, and as you can imagine, it’s vile. The chowder itself is actually okay, but the flavor of the salmon trounces everything. Solely out of hunger I make an attempt to eat around the fish, but I just can’t. I push the bowl aside.

Next up is my “hash,” which for some reason has a fragrance not unlike canned cat food. Furthermore, it is obvious that the whites on the eggs are not entirely set, leading me to believe that they are employing cooks who are sans eyeballs. Lastly, my English muffin is both cold and completely uncooked in the center. I push the food around on the plate — not wanting to send it back because clearly no one could give a shit in the first place — before paying the check and making a beeline to McDonald’s for a McGriddle that was absolutely glorious after whatever the hell I was served.

Naturally, I was apprehensive when I went back last month, the first time since. My plan was to order the exact same thing and let the cards fall where they may. I arrived in the morning and was the only patron sitting at the bar.

First off, I liked that the bartender was completely non-invasive, sensing I was there to eat and not to make a new lifelong friend. When I inquired about the chowder, he launched into the same song and dance about “whatever fish is freshest.” I explained that one time I had ordered it and it had salmon in it, to which he replies: “Yeah, sometimes it comes with salmon.” I just can’t risk it again — so I skip it and move on to the hash.

The plate of hash I receive this time is unrecognizable from the last — the first thing I noticed is that it actually smelled great. I break the properly cooked eggs over the meat and am pleased the meat’s texture has a nice balance of crunch to fat. It lacks seasoning, but that was easy to remedy, and with a few hits of Tabasco it’s pretty decent. The English muffin is cooked through and comes with a microdot of butter, and I just have to wonder why in the world they wouldn’t griddle it and make it 100 times better. Still, it becomes a reasonable conduit for the rest of my breakfast.

Though it was far tastier this time, it was still a $15 plate of forgettable hash, so I definitely won’t be racing back.

It goes without saying that people from Maine and away love Street & Co. I used be among them and went there often in the late ’90s, but it had definitely been a long stint away when a friend asked me to accompany him for dinner in late 2009.

That night, I had just finished my third gin martini at the Armory and was getting quite famished when he called to invite me. At the time, few things sounded better than a bowl of linguine with clams. We sat at the bar, where another friend happened to be working that evening. As a starter, I opted for the evening’s special, a dish of sautéed razor clams with blood sausage.

When the special appetizer arrived, the first thing apparent is that the clams are littlenecks, not razors. This renders my order a bit redundant given my entrée, but whatever — I have no problem eating a lot of clams. The more glaring problem was that there seemed to be no blood sausage in the dish either, which the bartender confirms when he notices me pushing things around in the bowl. He acknowledges that there must be a mistake, and takes it back to the kitchen, only to return with the same bowl two minutes later, with a message from the chef that the sausage “dissolves in the sauce.”

I understand that the texture of blood sausage has the potential to crumble and fall apart, but last I checked it isn’t supposed to “dissolve.” I’m annoyed, but let it roll because the linguine was what I was really looking forward to anyway.

The pasta is placed in front of me, in the “pan it was cooked in (which I have never understood the appeal of, but whatever … no worries).” It looks a bit soupier than it should be, but the genuine hitch is the solid teaspoon of grit I ingest over the next few bites. I’m pissed off now, but don’t want to make a scene, so I order another martini and vow to never return.

Recently, while experiencing another craving for linguine with clams, I thought that a trip back into Street & Co. might finally be in order. I choose a Sunday evening, showing up at 5 p.m. — which I know is annoying but also know they fill up very fast — and take a seat at the bar to await the opening of the kitchen.

In the meantime, I observe the polished staff deftly field irritating questions from patrons, making them feel right at home. They actually serve quite a few raw oysters in the period between 5-5:30, with the varieties on the chalkboard shifting before the kitchen officially even opens. I do like the ambience here, as it reminds me of old Portland — and is very cozy.

I already have a much better feeling about this time around before my pasta even arrives, and when it does it already looks and smells far better than when I had it last. I let the pasta hang out and cool down, during which it binds to the sauce, while removing each plump clam from its shell to mix in. The first bite is delicious, seasoned well, and redolent with a liberal amount of garlic. At first I’m cautious with the clams, but after a few bites I am working my way to the bottom of the pan with reckless and happy abandon. The superlative, chewy bread is perfect for soaking up the goodness as well. This is a damn good plate (or I suppose it’s a pan — I still don’t get it) of linguini with clams and white sauce, definitely worth the return visit.

Now that my gastronomic homage to Rob Gordon in High Fidelity has been a success — mostly because holding a grudge is exhausting and a complete waste of energy — I now feel like I can move on. Who else can I revisit?