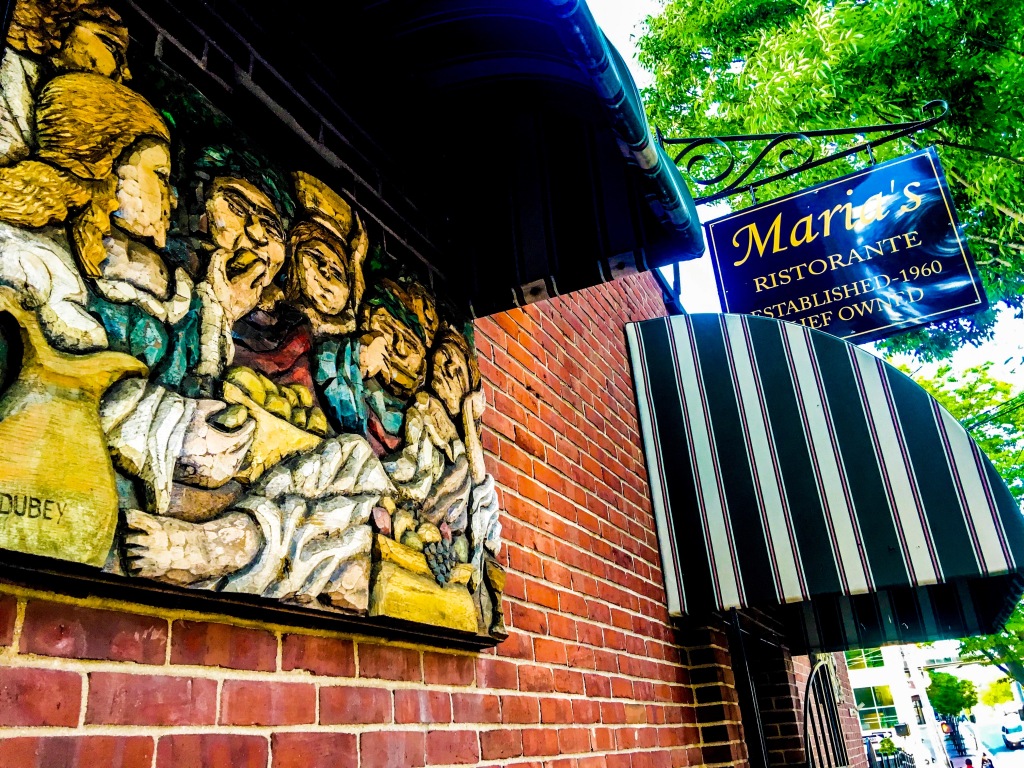 Originally published in the October 2016 issue of Dispatch Magazine

Picture me, young, standing outside of Maria’s Ristorante on Cumberland Avenue, wearing a navy pinstripe suit, white Egyptian cotton shirt, and white silk tie I had just picked up at Joseph’s (where I worked) earlier that day. It’s Friday night, and though we have a reservation, my date and I are still looking at a 15-minute wait. To pass the time, I light up a gold-tipped Sobranie “Black Russian” cigarette from a pack I had purchased at the Habana Room Cigar Café (where I also worked at the time, or, more accurately, got paid to stand around and smoke).

By that point, restaurants like Fore Street and Perfetto had begun to move Portland in a more progressive direction, but Maria’s was still widely considered to be one of the best eateries in town.

I was young, far less jaded, and still bore the Italian flag tattoo on my right arm (I later got that covered up). To me, Maria’s was straight out of a movie, the kind of place where the consigliere of the Gambino family might bring his crew before a night of gambling, violence, and whatever else it was that the Gambinos would do while enjoying their visit to a place that Bon Appetit would go on to name “America’s Foodiest Small Town” in 2009.

Once inside, the din of the crowds gave way to dimly lit corridors lined with Roman-style sculptures, as we’re led to a dining room anchored by an ornate chandelier. Everyone was dressed up, and even the wait staff were adorned in well-fitting black suits. The energy in the place was absolutely beguiling, and directly led to my fascination with, and longtime career in, the restaurant business.

I would always order the multi-course meal for two, at $35 a head, which included a bottle of wine (a decision that would surely fill future-me with hatred if I were waiting tables,), because back then it seemed crazy to roll any other way. I recall the wine, which was whatever the house was pouring that night, to always be delicious. It was nice not to be so cynical, and to be happy with wine that just tasted like, well, wine.

The starter was always the Florentine-style meatball, showered with freshly grated cheese and pepper, followed by an amply dressed, perfectly crunchy Caesar salad. You had a choice of entrees like veal parmesan and shrimp scampi, finishing with dessert – it was always more than enough food. I remember thinking that it couldn’t get any better, that this was truly the pinnacle of fine dining, and remained my “date-night” go-to until I moved to Chicago two years later.

Twenty years later, I sit in the dining room at Maria’s. It’s a mellow Wednesday evening in the middle of a particularly hot summer. The room has been renovated to allow more natural light to flood in than before, and the old carpeting has been replaced by handsome wood floors.

Since 1960, the Napolitano family has run the show. Greg runs the front of the house while Anthony Jr. holds down the kitchen. What has not remained constant is rest of the Portland restaurant world. In the past 20 years, the Napolitanos have watched myriad comings and goings of other eateries and food trends while steadfastly adhering to the menu that their customers have come to expect. They know that trying to adapt to such a fickle dining community is an act of futility, and for that reason I will always love Maria’s.

While so many places seek to populate wine lists with esoteric varietals – a practice I do not discourage – it is refreshing to see an old-school Italian wine list still in existence. What most people do not know is that there is a “reserve” section of that list, a holdover from the golden era where gems like 1989 Antinori Ornellaia, in magnum no less, sit alongside older vintages of Sassicaia and Opus One, all priced to move.

This time, I go through the same progression that I always do – beginning with the Florentine style meatballs, than the Caesar salad, and putting myself over the edge with a big plate of Vitello Salsicce Cacciatore, loaded with housemade veal sausage and served over spaghetti. All of it tastes just as good as it did, and has, over the past 20 years. Dessert is truly fantastic – a riff on tiramisu with caramel and shaved amaretti cookie and a dish of pistachio gelato. It is worth noting that they have always made their limoncello and grappa (Greg makes an apricot eau di vie of sorts), and both are exemplary.

Granted, the crowd here is far different now.  On this particular night there are several neighboring diners whom Tony Shalhoub (in Big Night) would refer to as “Philistines.” Then again, it had to change. Portland is different, especially the neighborhood that the restaurant is housed in.

What’s important is that the Maria’s itself doesn’t change. If I ever hear anything but Pavarotti or Bocelli on the speakers, I know the apocalypse is near.